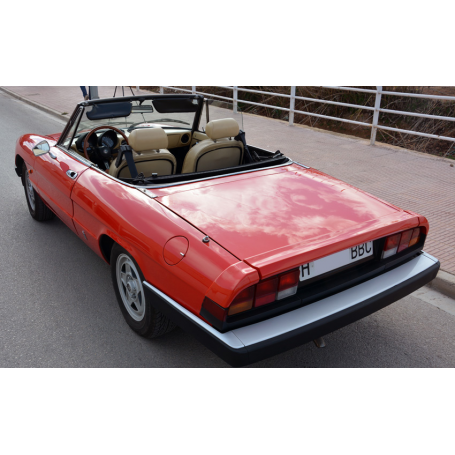 Impeccable. In perfect state of functioning.

The Alfa Romeo Spider (105/115 series) is a roadster produced by the Italian manufacturer Alfa Romeo 1966-1993 (190 Spiders badged as 1.994 commemorative editions for the North American market). Widely regarded as a design classic, it remained in production for almost three decades with the cosmetic changes and mechanical of small importance, with the series I-III originally mounted Pirelli Cinturato 165HR14 tyres (CA67) through his course of life. The first three series were assembled by Pininfarina in Grugliasco and the fourth series in San Giorgio Canavese. The last spider was produced in April of 1993, was also the last transmission of the rear wheel Alfa Romeo produced before Alfa Romeo 8C Competizione was introduced. On 23 may 2012, Fiat announced it was forging an agreement to develop a new Spider for 2015 with Mazda based on the Mazda MX-5 platform. The agreement was finalized on 18 January 2013.

Origin of the name of the spider

The name comes from the English word "speeder", a two-person open horse-carriage, and has nothing to do with an arthropod of eight legs. Spider is also the name of a body convertible is not only a car name, like "barchetta". Some other brands use similar names: ex. Maserati Spyder, Ferrari 250 California Spyder. In the 1930s a version of the Alfa Romeo 8C was known as the Spider. This had an engine of 2.3 liters and a racing version of cars, the Spider was driven to victory by Tazio Nuvolari in the Targa Florio race in Sicily in 1931 and 1932.

for an MGB ). In the Uk the price of the car was close to a Jaguar E-Type .

In 1970, he introduced the first significant change in the exterior style in the 1750 Spider Veloce, with distinctive round tail elongated from the original, changed to a tail of the court's more conventional, so-called " tail Comb ", as well as improving the luggage space. Many other small changes took place inside and on the outside, like a grill slightly different, new doorhandles, a windshield more sloped, pedals-top with hinges and a better interior finish.

1974 saw the introduction of the, request factory rare, Spider-Targa. On the basis of the spider, which featured a rear window-style solid Porsche and remove the roof panels, all made of type material, GRP black. Less than 2,000 models of this kind never did and it was the only solid part of the chandelier in the ceiling until the introduction of the artisanal factory hard top.

The 1300 and 2000 cars were modified in 1974 and 1975 respectively to include two small seats behind the front seats, becoming a "two plus two" four seater. The model 1300 was discontinued in 1977. In addition, between 1974 and 1976, the bumper stainless steel style early were discontinued and replaced by units black, rubber-coated to meet the increasingly stringent requirements of shock american.

The Series 3 spider was previewed in North America for model year 1982 with the introduction of litres electronic injection Bosch 2.0 to replace the mechanical injection SPICA.

The spider underwent a major reform of style in 1983, which saw the introduction of the front and rear bumpers in black rubber. The front bumper incorporated the grille and a small soft rubber spoiler on the trunk lid. The change alters the exterior appearance of the car considerably and was not universally praised by enthusiasts. Also several changes were made to the mechanical and aesthetic qualities of minor importance, and the car (never available in North America) 1600 dropped the name "Junior".

The model Quadrifoglio Verde (Green Fourleaf Clover) was introduced in 1986, with many aesthetic touches, including side skirts, mirrors, new front and tailfins, the trunk of a hard rubber mounted spoilers with third brake light, integral, unique 15 "alloys and optional hardtop, removable. Different interior trim included red carpets of the blood and of the seats of gray leather with red stitching QV was offered in only 3 colors: red, silver and black for what else was mechanically identical to the model Spider Veloce standard, with a cc, double overhead camshaft 1962, four-cylinder engine (twin carburetors of the two-barrel in Europe, the models of North America remained the injection of fuel Bosch L-Jetronic, introduced for model year 1982, except that the mechanism VVT was now L-Jet activated) and five-speed manual transmission.

The interior was revised with a new center console, panels, lower dashboard (to meet u.s. regulations) and a single set of indicators monopod (with electronic meter). For the north american market were added to a model known as the Diploma in tribute to the famous appearance of the car in the film of 1967, The Graduate , starring Dustin Hoffman .

The graduate was conceived as a less expensive "entry-level" Alfa. Despite the fact that it had the same engine and transmission, the Quadrifoglio and Veloce, it lacked the alloy wheels and luxury features of the other two models. The model of Postgraduate had manual windows, seats are basic vinyl, a cap of vinyl, and wheels of steel series. Air conditioning and radio installed by the dealer were the only options. First appeared in 1985 in North America and continued until 1990.

Minor changes occurred in 1986-89, including new paint colors, a center high stop light ( CHMSL ) mid-1986 for north America models, a departure from the brown carpet-fade and prone to the new levers turn signal. Some models 1988 presented automatic seatbelts that extended from a large device between the front seats.