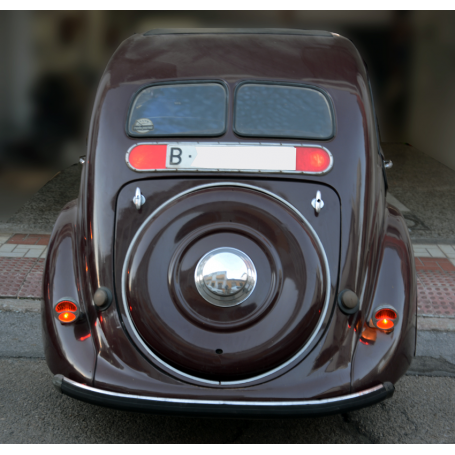 Matching Interior. In their original state. Such as it is.

The Peugeot 302 is a saloon car of average weight entered in the 1936 Paris Salon by Peugeot and listed, for just 18 months, until April 1938.

The 302 was effectively a shortened version of the Peugeot 402 with an engine smaller. Launched a year after the 402.

The aerodynamic 402 was received with enthusiasm by the market, but it was half a class larger than the Citroën Traction Avant, which had in many ways rewritten the rule book when launched in 1934, and that during the 1930s, later acquired a range of different sizes of motor and distances between the axles. The 302 could compete more directly with the Citroën as a modest return to stability after the economic crisis of 1929 gave to understand in the future growth of market demand for the sedans mid-size. However, for the time that the car was actually launched, the country was in a state of agitation industrial and political uncertainty increased.

Peugeot had ended production of its popular 201 models in September 1937, and its replacement, the smaller Peugeot 202 would appear only in February of 1938. At the time of the Motor Show in October 1937, the Peugeot 302 was still in the list, in part to help clean up remaining stock after what had been a year precarious situation of the French industry, both economically and politically, but the car itself was absent from the trade show booth Peugeot. through the fall and winter of 1937 to 1938, the 302 was the smallest and least expensive car offered in dealerships of Peugeot.

The 302 faithfully followed the style of the longer 402, with a grill sloped front behind which hid the headlights. A detail eye-catching was the hole of the grip starting at the bottom of the front grille, which passed through the digit using the name vertically, an inscription: "302", color patriotic blue, white and red.

In addition to the sedan and two-door, four-seater convertible of the manufacturer, there was a small number of special versions of the body including a Darl'mat built 302 roadster and a cabriolet incorporating the automatic design of the ceiling of steel folding, patented by Georges Paulin in 1931.

The water of four cylinders cooled 1,758 cc engine was in most respects similar to that of the engine is slightly larger is installed on the 402. The maximum output of 43 HP (32 kW) was claimed along with a maximum speed of 105 km / h (65 mph).

The energy was released from the front engine to the rear wheels through a traditional box of gears for 3 speeds.

A couple of years earlier, Peugeot had scored a first place among the automobile manufacturers in volume when presented an improved version of the 201 with independent front suspension and with competitors such as Renault reluctant to invest in keeping up to date on the technical aspect, and the later models Peugeot as the 302 with independent front suspension, Peugeot were able to win applause by a technical advance that provided for on-road comfort, especially when the car was driven fast on bad roads. At the back the 302 used a rigid axle suspended the use of combinations of cantilever-spring.