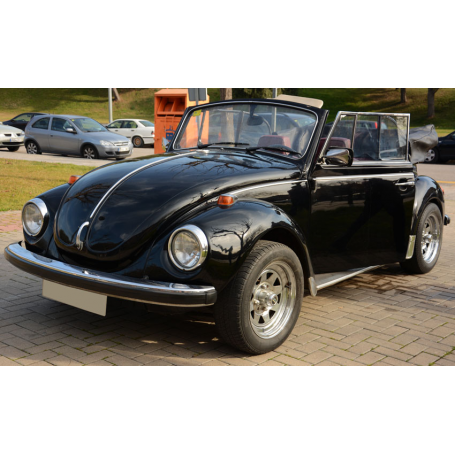 The VW Beetle was one of those phenomena in the history of the car whose life is out of any logic. Who could imagine that a car born before the War would still be making and selling without problems in the 70s? Even more difficult was to think that would come until the year 2000 in some markets, such as the mexican and the brazilian. Be that as it may, the reality is that engineers at Volkswagen have decided, in the late 60's, that could make them any improvement. This idea was born in the 1970s, the series 1302 , and in 1972, the series 1303, whose main change was the replacement of the front arm overlapping and torsion bars for a scheme McPherson, much more modern, less heavy and with a more smooth and progressive. Behind also modifications were made by resorting to a schema of arms cross, although in this second case, they kept the torsion bars as elastic elements. It is curious that, with this type of suspension, the Beetle ended up with solutions similar to their cousin the Porsche 911.

In the section mechanical is continued with the evolution of the four-cylinder boxer, air cooled, up the power of the version to 1300 cc, up to 44 HP passing the 1500, appeared a couple of years before to 1,600 cc, thanks to the use of pistons of larger diameter. With this work, Volkswagen announced the “remarkable” performance of 50 horses. A figure that can make us laugh, because any motorcito 1,000 cc reached without problems in the years 70, but that, in short, was responsible for the extraordinary duration of these mechanics. If to this we add that the German brand used a few developments frankly long, with the engine rarely went to 4,000 rpm (the regime of maximum power) in the highest gear, it is understood perfectly that the maximum speed was announced also as a cruising speed.

These changes in the series 1302 also inieron accompanied by some touch-up aesthetic, as the use of a front hood somewhat more convex, with the improved slightly the ability of the trunk, a few fins more rounded, crystals of larger size, and the headlights with crystals vertical, a solution imposed by the american market, already used on the 1500 a couple of years before. With these changes the image of the Beetle became somewhat more chubby, losing some of the charm of the first series but, for the satisfaction of their followers, was still preserving its appearance of “whole life”.

Making contact with the new range 1302've done with a version LS Cabrio that mounts the engine to 1600 cc. The L luxury, has its origin in the fact of equipping rear window heat, fan with auxiliary engine and reverse light; and the S of sport, is based on the existence of an engine of 50-horse and the installation of some disc brakes in the front.

Once inside, we noticed some of the details of comfort, such as the presence of a few seats whose backrests are fitted with the headrest, a dashboard painted in black and a special insert, on which is inscribed the emblem of Karmann, in charge of the manufacture of the versions open, by the way, are quite well resolved, with a canopy that folds and unfolds with ease and, that, when you are driving with it on, it isolates very well the interior of the inclemency of the weather, with the added bonus of not introducing much noise.

The instrumentation is limited to a central speedometer, which incorporates the level indicator of gasoline (there is no longer a key step for the use of the reserve) and a trip total. It seems that Volkswagen is pitching the idea of a vehicle as reliable as the Beetle does not need more information. Although not to take on too much risk placed, within the speedometer, a couple of informers who are responsible for advising us of the dynamo load correctly and that the oil pressure at idle is maintained at correct values.

The implementation does not need more work than stepping on the accelerator and release it, so that in function of the auto choke, and turn the ignition key. Normally the 1600 was launched in the “back room”, ready to start the march. The lever of the switch is handled without problems, provided that we do not endeavor to use it very quickly, with tours that require the guide properly in your tour. From the first meters we will notice the presence of a engine with torque values higher than that of the motors of 1,200 and 1,300 cc, though the feelings it conveys are very similar: increases turns quiet accompanied by the unmistakable purr of the four opposing cylinders. And the feeling that it is not useful to insist much on the gas pedal once we've reached the 3,500-4,000 rpm, at which time we'll capture about 30 km/h in first, just over 50 in second, 90 in third and slightly above 125 in fourth.