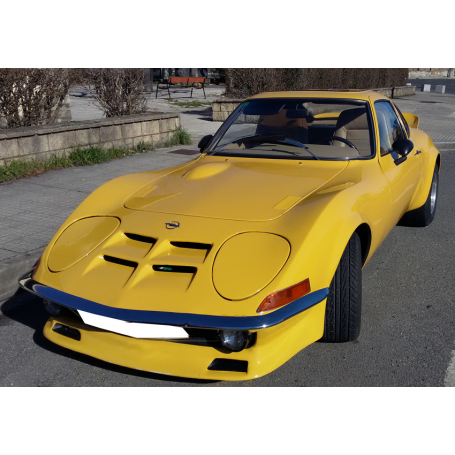 Opel GT - Double-coupé manufactured by Opel in 1968 years . External is referred to the Chevrolet Corvette , the bodywork was designed by Clare to McKichana (which has developed many Chevrolets in the mid-50's) and Chuck Jordan (who designed, among others, the Chevrolet Camaro of the 60's and a Corvette Stingray). Despite the fact that they have only produced for five years, returned to the market after a hiatus of 34 years as a roadster manufactured by General Motors .

Opel GT was equipped with a four-cylinder 1.1-litre capacity and 67 horsepower, but the majority of customers opted for the version with a displacement of 1.9 liters and 102 HP. Due to the limits of exacerbations standards of exhaust in the united States in 1971 year Model reduces to the compression unit stronger, and therefore the power was reduced to 83 HP. In Europe, the model was also sold GT / J, it was simply a cheaper version of the Opel 1900GT. The standard GT was equipped with a manual gearbox four-speed, but a more powerful version of the engine is offered as one of three stages of the machine . In addition, the braking system of the steel body is composed of a front disc brakes and rear drum brakes. Opel GT does not have power steering.

The only solution unusual for the Opel GT was headlights only lit by a large lever on the central console with the gearbox. In contrast with most of the lights opening, which is placed in the Opel rotate together around 180 degrees to the left (seen from the passenger compartment). Joke of the owners of the GT, it is easy to recognize when muscular right arm, which was needed for the support of the lever.

The only "trunk" of the Opel GT was a niche behind the seats, and behind it is mounted the spare tire and the jack.

The interior of the Opel GT was very large for this class of vehicle thanks to the process of original design, developed for the first time in the interior, and then cover with the body.

During the five years of production of the Opel GT has sold 103 463 copies. The most significant of these are the first hundred copies of which were hand-made in 1968, years and models with engine 1.1 L that they only sell 10.760 copies 3573a manufactured after 1969 years is the GT model European / J, that he was deprived of almost all the chrome parts and standard equipment .