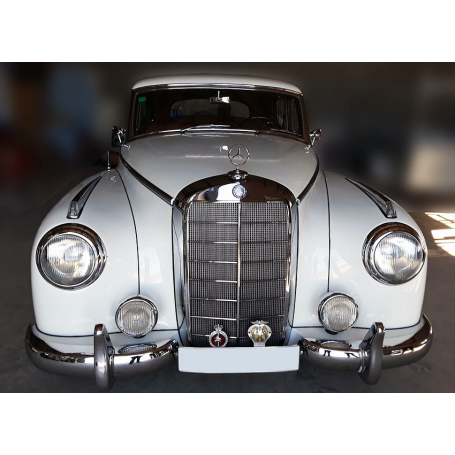 The Mercedes-Benz W186 model 300 was a luxury tourism of four doors produced by Mercedes-Benz between 1951 and 1957. The car's largest and most prestigious of the company, it was the Maybach of its era, elegant, powerful, exclusive and expensive. There were three successive versions, known informally as 300a (or simply 300), 300b, and 300c. An expanded variant "300d" built on the chassis W189 what happened at the end of 1957.

Also known as a "Type 300", the W186 was equal in features and price but superior in performance to the rival Rolls-Royce Silver Cloud . Favored by statesmen and business leaders, offering options such as a partition glass, mobile phone, VHF radio, and machine dictation .

Anything less than hand built as the flagship of the company, the W186 is often identified as a Adenauer, after Konrad Adenauer , the first chancellor of the Federal Republic of Germany, which employed six custom versions of the cabriolet , berlinadura and landaulet of the W186 and his successor, W189, during your mandate, 1949-1963. Among the custom features of these "cars on parade" were writing desks, sirens, curtains, divisions, partitions, sunroofs and configurations of "landaulet" of the middle roof.

Technologically advanced, the 300 was regarded as a car "driver", sharing the numerous innovations of design and mechanical components with the iconic Mercedes-Benz 300 SL "Gullwing", which includes engine, suspension and chassis.