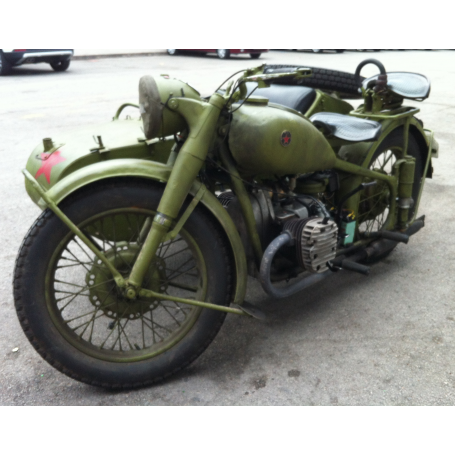 The M-72 was a motorcycle built by the Soviet Union . Conceived as a replacement for the two heavy motorcycle used by the Red Army-the TIZ-AM-600 and PMZ-A-750, these had an unsatisfactory performance during the Winter War with Finland and were considered designs obsolete. The replacement chosen was the BMW R 71 which had been rejected by the Wehrmacht as a replacement for R-12 . As a result of the Molotov-Ribbentrop Pact , were implemented legal procedures, political and economic necessary for BMW to provide the design, tools, and training for the manufacture of sidecars for motorcycles and the military.

The production was intended at three factories located in Moscow , Leningrad and Kharkov with ancillary items coming from several other factories. Only the factory of Moscow MMZ manufactured motorcycles complete before the German invasion and the beginning of the Eastern Front (World War ii) .

The factory in Moscow was moved to the east to the city of Irbit in western Siberia and renamed IMZ . The factories of Kharkiv and Leningrad were relocated to Gorkiy on the outskirts of the automobile plant trucks / GAZ and renamed it to GMZ . During the war, motorcycles were produced both in IMZ as in the GMZ , however, all the sidecars for motorcycles M-72 and Lend-Lease were built in Gorkiy. In 1952, he sent 500 motors M-72 from IMZ to enable the factory KMZ in Kiev, Ukraine to produce its first batch of M-72. KMZ produced M-72 until 1956. A model closely related, the M-72N occurred later.

Motorcycles M-72 were produced predominantly with a sidecar attached, although some solos made appearances for the duties of escort and the like.

The M72 is often referred to as "Ural" or "Dnepr". This is not correct because these names are model names, like "Camaro" or "Corolla", and is used for the first time after the M72 ended the production in Russia. The correct name is simply M72. If necessary, use the prefix IMZ for models produced by Irbit and KMZ for models produced in Kiev.

4 other products in the same category