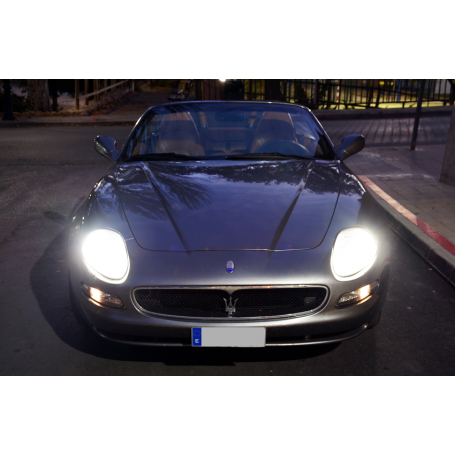 The Maserati Coupé and Spyder (Type M138) are large passenger cars produced by Italian manufacturer Maserati from 2001 to 2007. They have now been replaced by the GranTurismo. The two nameplates refer to the four-seater coupé and two-seater roadster versions, respectively. Both models were based on the 3200 GT which was sold in Europe, but not in the united States. Due to the confusing nature of the names of "Maserati Coupe" and "Maserati Spyder" (which could refer to any coupe or convertible Maserati has done) the Coupé and Spyder are both commonly referred to as the 4200 GT, which is an evolution of the name of the previous model and a reference to the increase in engine displacement from 3.2 L (3217 cc) to 4.2 L (4244 cc).

The Spyder is unveiled for the first time to the public at the 2001 Frankfurt Auto Show with the debut of the Coupe following shortly after at the 2002 Detroit Auto Show. Sales in the united States began in march 2002 for the Spyder and in may for the Coupé. The release of the Spyder heralded the return of Maserati to the North American market after a hiatus of 11 years. Almost as soon as it was introduced, the Spyder was selected by Forbes magazine as the Best GT for 2001.

The Coupé and Spyder were designed by Giorgetto Giugiaro of Italdesign, who also designed the Maserati Ghibli, and the later mid-engine 1.971 supercar Maserati Bora. Interior design was commissioned to Enrico Fumia and based in large measure on 3200 interior GT, redesigned in 1999. The cars were built at the plant in Viale Ciro Menotti, in Modena, Italy.

In late 2004 the Coupé and Spyder underwent a slight facelift. This meant a new grille, a little larger, with its lower edge pulled somewhat lower into the lower lip of the front bumper. Also the Spyder has a rear glass window in 2003 instead of the plastic material standard. The new grille also features horizontal bars, while the oval logo Maserati 1963 style, now mounted on the C-pillars, and a new air outlet (according to versions GranSport) appears in the rear side lower.

The Maserati Coupé and Spyder utilize the same vehicle systems - engine, transmission, suspension, and the inner conductor and controls front passenger and security equipment. Their performance specifications are almost identical, with some reviewers claiming that the Coupé has better performance due to its lower weight and body structure more rigid, while others measured faster performance from the Spyder. Both models came standard with 18-inch alloy wheels that originally had a design of 15 radios, but after 2003 most buyers chose the wheels sport 7-spoke optional became standard for the year 2005. Maserati offered sixteen exterior colors, ten shades of leather interior along with the ability to select among colors for various interior details, such as the piping and stitching used. They also offer five colors for the hood of the Spyder.

Significant changes relating to motor GT 3200 before were the larger displacement resulting from an increased diameter of the cylinder bore and the passage to an intake of kw that replaced the twin-turbo approach Maserati had used for the previous 20 years, fundamentally because the powertrain is now Ferrari based. The engine runs at a compression ratio of 11.1: 1 with the cylinders configured in a 90 ° V8. The diameter of the hole of the cylinder is 92 mm (3,62 inch), and length of the piston stroke is 80 mm (3.15 in). The actions of the engine many of the design features of racing engines modern, including dry-sump lubrication, a pump set located outside of the crankcase, and four valves per cylinder. The 32-valve DOHC engine uses motor driven by chain, double overhead camshafts that provide valve control in less than 0.15 seconds, with the cams of admission being controlled by the distribution variable. The crankcase and cylinder heads are made of an alloy of aluminum and silicon, giving the engine a relatively light weight of 405 pounds (184 kg).

The manual transmission is a six speed that was available either as a GT (manual gearbox) or CC (Cambiocorsa) using paddle shifters. The GT version utilizes a foot operated clutch, whereas the Cambiocorsa (Italian, meaning "change of career") is a manual transmission with electro-hydraulic that uses a Formula One gearbox type operation, the hydraulic and electronic management operated by F1- . palettes style behind the wheel, similar to the system used in the vehicles Ferrari The system allows the driver to choose between four different operating modes: Normal, Sport, Auto and low grip. Each of these programs is selected by means of buttons of the console assembly, which correspond to the different types of mode of operation. When you change modes between Normal and Sport, the driver can select between different electronic stability control settings and, if installed, different active suspension settings. [28] The Normal mode offers a more comfortable ride, while the Sport mode stiffens the suspension and provides gear changes fast around a quarter of a second. Automatic mode electronically handles shifting of the transmission, but allows the driver to quickly return to manual via the paddles F1-style. The low grip, or ice, allows the starting and gear changes are smooth in the snow and ice.

The gearbox of the transmission is in the rear of the vehicle and is integrated in the differential. This gives both the Coupé and Spyder a weight distribution of 48/52% between the front and rear axles.

The Maserati Coupé and Spyder both have a light alloy double-wishbone suspension. The rear suspension is equipped with a bar of regulatory convergence that improves the accuracy of the transmission and provides curves balanced. The design of the front suspension features anti-dive" to prevent dive when braking. The suspension system is complete with front and rear sway bars.

Perhaps the most appreciated is a cushioning system of suspension controlled by a computer called "Skyhook". This adaptive damping system uses coil springs over shocks and a set of six accelerometers that continuously monitor the movement of the wheels and the underbody of the vehicle and transmits this information to a control unit. The vehicle's computer analyzes this data and coordinates it with the Cambiocorsa transmission and other security systems for Maserati. Skyhook then calculates, and recalculates, the data at least 40 times per second and instantaneously adjusts each shock absorber accordingly. When placed in the Sport mode firms the suspension for better cornering.

Both vehicles are equipped with front passenger and driver and side air bags, as well as safety belts with pre-tensioners. Driving stability is provided by the Stability Programme Maserati (MSP) which became standard on 2004 models and controls the engine and brakes to help the driver control the vehicle in extreme driving situations. The system MSP integrates four different systems of vehicles - regulation anti-slip traction control (ASR), regulation of engine rotation (MSR), electronic distribution of braking (EBD), and anti-lock braking system (ABS). The wheels employ a high-performance Brembo braking system with light alloy four-piston calipers and large ventilation cross-drilled discs.

The Coupé and Spyder came standard with an information center that combines audio controls and climate. An optional GPS navigation system and hands-free GSM phone were also available as options integrated into the info center. [40][41] additional optional equipment includes xenon headlights, upgraded audio system and CD changer, electrochromic rearview mirror, rear parking sensors, heated seats, and cruise control. They offered several packages of interior equipment, including a roof made of leather that offers a model of the grosgrain, and either a carbon fiber kit or kit of wood Briar wearing wooden parts of the steering wheel, door panel, and the shift lever. Buyers could even order the luggage custom Maserati, made to match the interiors of their cars.

The Maserati GranSport is a modified version of the Coupé and Spyder that was first unveiled at the 2004 Geneva motor show. It is equipped with aerodynamic cladding body, a mesh grille chrome, carbon fiber interior trim, and special 19-inch ( 480 mm) wheels. Uses the active suspension Skyhook, with a 0.4 inch (10 mm) lower ride height, and the transmission Cambiocorsa is recalibrated for faster shifting. The exhaust has also been specially tuned to "growl" on start-up and full throttle.

The special editions Maserati Coupé and Spyder are primarily packages of outdoor equipment that is only offered for certain model years or on a limited number of vehicles. They include:

Also, in 2004, we introduced a package of adjustment of the harvest. Includes grilles, chromed exhaust air in the front fenders, a new design of polished wheels, brake calipers with silver finish, and chrome door handles. The fender vent, headlights were intended to evoke those of the 1957 Maserati 3500 GT.

A 2004 edition Coupe 90th anniversary was announced, but apparently never produced. The Anniversary Spyder 90a is shown at the end of 2014 and produced in the limited number of 90 cars to North America and 90 other cars for the rest of the world. Fifteen were on the steering wheel to the right, especially for the United Kingdom. It is based on the GranSport Spyder (without improvements in energy), and can be recognized by their oval badge of Maserati in the front fender, brake calipers in titanium color, casings, the headlights of a gray color and a special interior with large quantities of blue carbon fiber. The head restraints also received fairings aerodynamic behind the roll bars.