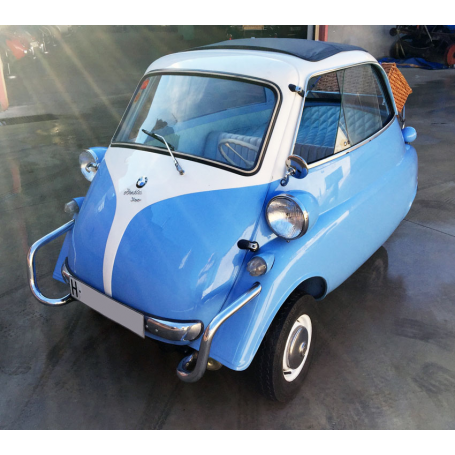 The BMW Isetta was a microcar , that the bavarian Motor Works built 1955-1962. The manufacturer indicates that classified between the motorcycle and the vehicle automobile as a "car bubble".

BMW had during the Second World War in the two Munich works Milbertshofen and Allach primarily motorcycles and aircraft engines built. After the war ended in 1945, car production was unable to resume due to that in the soviet occupation zone preferred car factory BMW Eisenach was part of the society soviet Awtowelo .

The production of vehicles in the BMW began in 1948 with motorcycles . The first BMW after the war of new development and in 1952 produced car, known as the "Angel Baroque" BMW 501 was a commercial failure, as the car with six-cylinder engine was only affordable for a small circle of buyers. However, the sale price of 15.000 indoor DM (1952) is not the cost of production.

Initially came for many of the clients in the best motorcycles in the consideration of complete vehicles, as the. Volkswagen was - also due to the lack of a driving license-class III - often out of the question. However, the old license IV was also true for vehicles up to 250 cc. This regulation came producer inventive with vehicle rollers (z. B. the Goggomobil or the Messerschmitt ). However, BMW then had only motorcycles and vehicles of high-end BMW 502 / 503 with V8 engines on offer.

Meaning of the Isetta from BMW

In Italy designed by Renzo Rivolta, the director general of the manufacturer of motorcycles, Iso Rivolta , a microcar in an unusual way: The Iso Isetta, which was presented to the 1954th like that with a fridge that worked on the vehicle until the front door; finally, if the Society above-named Iso-thermo, then, that they built. The steering wheel is turned to the main door to the front and to the side, and as well offered a good entry into the interior enough for two people.

BMW became in the mid-1950s gradually into a severe crisis. Time for planning and construction of a mini-car was not, only there was another option: to manufacture under license . In the living Room of Turin, the delegation of BMW became aware of the Isetta, and saw in it an opportunity. After the termination of the license agreement with the Iso Isetta was presented one at the factory and the construction of the optimization. The Isetta was an engine of a single cylinder of the programme of the motorcycle BMW, rebuilt in the cooling fan and the alternator to the starter. The BMW Isetta, unlike the three-wheel two-rear-wheel original. It was found that the structural changes to be successful.

The Isetta was a financial crisis in a BMW is not turned away, but brought at least to win time. On march 5, 1955, was presented to the public at a price of 2580 DM. The specialized press was impressed. Between 1955 and 1962, 161 728 Motocoupé sold. This number is only exceeded Goggomobil . The success of the Isetta of BMW gave the finances and time necessary to develop their own models as a new class of wine in the market. The Isetta is one of the symbols for the rapid reconstruction of Germany after 1945, the so-called economic miracle .

From April 1955 to march 1956, the first version of the Isetta was built. Both the model 250 and model 300, as well (submitted in December of 1955) had a rear window panoramic large, side windows fixed the windows are open, and triangular. In October 1956, the second version, "Export", 250 and 300, in the market. They differed from the previous model, in particular for the sliding windows on the sides and one rear window small glass of safety. The hinge represented and both models were also on the telescopic shock absorbers in front. The standard model 300 had a friction damper.

BMW had received from Iso the right to export to the scandinavian countries, Austria and Switzerland, while the Benelux countries, Spain and France from the licensee Spanish Iso Spain (identical with Iso Italy) and the licensee French Velam (the Vélam - Isetta is supplied as a self-supporting structure developed). In addition, in Brighton it was a manufacture under license of the BMW Isetta as a "Isetta of Great Britain", where RHD versions and tricycle are offered regularly. On the other hand Brighton to supply the scandinavian market, as well as Australia and New Zealand. In Brazil, the Romi-Isetta was of Industrias Romi then built from 1956 initially as under a license directly from Iso Italy, starting in 1959, on the BMW-with a license from BMW.

Also in the export markets of the Isetta was a success. For example, there was a model of the united States with the headlamps of sealed beam larger and the rear lights larger and a model tropical with adjustable air intake through the main door. The Isetta was available in a convertible version, in place of the plexiglass of the standard version, a folding soft top can be folded down; he had the convertible version of the export Isetta then a cover, folding rear shortened and modified the rear part of the roof structure of sheet metal to the same size remained. A derivative of the Isetta model collection convertible, in which in place of the rear hood is used a last construction, they found few buyers.

In 1957, a version of four seats of the BMW 600 in the market in addition to the entry door has a side door to the right and a rear bench seat. In the front door and the spare wheel is housed. The BMW 600 has a two-cylinder engine with 585 cc, 19.5 HORSEPOWER. front and rear wheels are suspended from the oscillation longitudinal. The engine of the BMW 600 was also a motorcycle engine umkonstruierter, this time from the model BMW R 50 with hole enlarged.

During the entire period of construction, the attention is focused on the Isetta mainly to address the shortcomings and the optimization of the production. The key elements have always remained the same.

The production of the BMW Isetta was posted in may 1962a Until the early 1970s, was still fairly well represented in the street scene.

The single-cylinder engine, four-stroke, air-cooled, there were initially 12 PS (245 cc), from February 1956 to 13 HP (295 cc). It is installed on the right side of the car cross behind the seat. There is an engine stop of a single transmission dry and have a trim. The Isetta has a reverse gear, which was not evident in the microcar, and four non-synchronized forward speeds of seamless switching back between the domes and the gas intermediate demand, and also when it happens are more small and intermediate Schaltpausen advantage of coupling. The shift lever is to the left of the driver, go to the gearbox on the switching commands via a link complicated, and a cable. The pattern of change with the right rear lies first gear and the fourth gear, the front left is used to.

On a rubber cross-sectional emerged pto and a duplex chain in bathroom of oil is powering the rear wheels. Due to the small track width of the rear axle in just 52 cm does not need any differential.

The Isetta has a tubular steel frame, a two-seater body completely made of steel is equipped with front entrance. The side windows and the panoramic window in the rear of the models 1955 and 1956 were of plexiglass . For ventilation, is produced in a first time with the exception of the sun roof only Dreiecksausstellfenster left and right. The model of "export" from 1957 has to take a look at the side windows sliding, two vent valves in the door, of which is said in the booklet to ensure a "no draft ventilation" "and the face of another interesting feature". The first version will continue initially to be built as a model "standard". Body and chassis can be separated in the Isetta and the BMW 600 of each other.

The BMW Isetta from 1955 you can see in the housings of the headlights over and a glass brake light triangular; Since 1956, the headlight housings were ovoid.

The front wheels are pushed to the short oscillation longitudinal suspended by coil springs, initially with shock absorbers friction and 1957 with telescopic shock absorbers. Subsequent Isetta guided on a rigid axle swingarm long with two Viertelelliptikfedern absorbent and shock. The foot brake operates hydraulically on all four wheels, the two rear wheels have only a drum brake common. The diameter of the brake drums is 180 mm, the total of the braking surface 324 cm2.

Between the motor mount and the motor, the spare wheel is housed. Hand brake (since 1956) and the drive lever of the strangulation, and later also for heating are found as the lever of changes in the exterior wall left. In the front left door-hung a small instrument panel is mounted on the steering column and the mitschwenkende insured. A heater is not provided in series in the first two years of construction. The interior panels are made of cardboard printed some extracts are for pipes fined optically.

As the Iso Isetta was also the model BMW in the first realization of series a convertible top folding. In the second realization, and the BMW 600, a collapsible roof was not part of the standard equipment, but it could be as special equipment, made by gold was ordered.

The tank is installed in the rear of the Isetta above the rear axle; He sums up including the gas reserve of 3 litres 13 litres and has a key of fuel. That is enough for the theory of the unit up to four hundred kilometers. With a style appropriate license or piston rings are worn, but increases the consumption of over 5 liters per 100 km

With a fuel consumption specification (factory) "approximately 3,45 litres / 100 km at 57 km / st", the BMW Isetta in 1955 as the first in the mass built car of 3 liters in the world are considered. The engine of your cylinder and low weight are doing so with moderation. At the same time, it is with 161.728 parts is probably the car of a single cylinder of greater sale in the world.

A version of three wheels of the BMW Isetta was 1959-1960 "300 Export BMW Isetta" made in about 1500 parts for export on the basis of; therefore an imposition favourable has been exploited as a motorcycle, due to the classification of the affected countries. The rear wheel was a rocker guided and driven by a fully enclosed chain on the left side of the vehicle.

Today, the Isetta is a favorite of the public, popular figure of the BMW brand and a historically interesting piece of automotive history.

Another replica of the Isetta 250 represents the japanese company Duesen Bayern ago. This version is based on the platform of the Nissan Hyper Mini . The components used for this replica to come from BMW , Nissan and Toyota .

A copy of the BMW Isetta is located in Bonn , House of History , the Museum of Transport in Karlsruhe and the version of the police in the 1st Museum of the Police cars German Marburg .