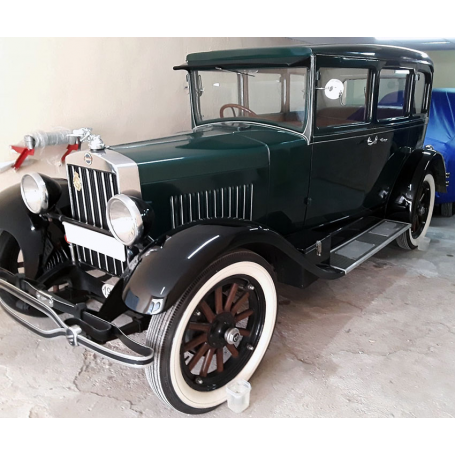 Change original 3 gears is delivery with the purchase.

Historical vehicle since 1998. ITV: every 5 years.

Video provided by the owner:

The Studebaker Commander is the model name for several cars produced by Studebaker Corporation of South Bend, Indiana (Usa) and Studebaker of Canada Ltd of Walkerville and, later, Hamilton, Ontario (Canada). Studebaker began using the name of the Commander in 1927 and continued using it until 1964, with the exception of 1936 and 1959-63. The name was applied to several products in the line of the company from year to year.

Not only managed that, but then established new records up to 25,000 miles (40,000 km). The two roadsters sports averaged more than 65 mph (105 km / h) and the sedan, which had flipped over the tables frost during one of the night races and had been repaired with haste, averaged almost 62 mph.

After this, the three cars were closely examined, part by part, and it was established that they were strictly car inventory, identical in all respects to those available in any showroom of Studebaker.

In Australia, a crew of three drivers, led by Norman "Wizard" Smith was concerned with the records land using a roadster Commander. In a race of 3,000 miles from Fremantle to Sydney , broke the previous record by 12 hours and 23 minutes despite traversing 450 miles through a rain blinding and having to wade through a river when a bridge had been washed away. The team rested a little more than three hours before attempting another record in the track of 600 miles to Brisbane .

These sixty were the last descendants of cars robust designed for roads, poor at the beginning of the TWENTIETH century, loaded torque and solid construction. Adapted less at cruising speeds higher made possible by better roads in later years.