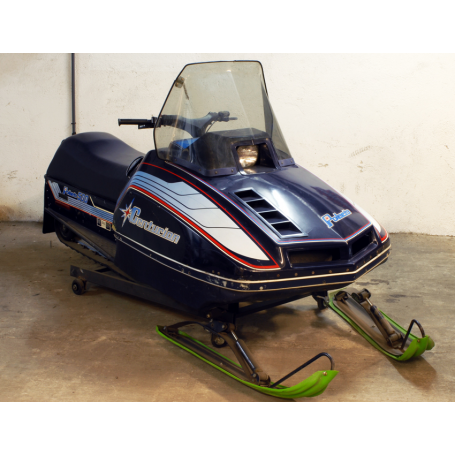 Book of intrusions original in English.

Psed. visible in the pictures the bodywork of glass fibre and on the screen.

Polaris Industries is an american manufacturer of motorcycles , ATVS and electric vehicles neighborhood . Polaris is based near Minneapolis in Medina , Minnesota , USA.UU.. The company also manufactures motorcycles through its Victory Motorcycles subsidiary and through the Indian Motorcycle subsidiary which it acquired in April 2011. Polaris no longer produces watercraft .

Robin (a subsidiary of Fuji Heavy Industries , owner of Subaru ) develops and supplies all-terrain vehicles (ATV) and engines of snowmobiles for the american leisure equipment maker Polaris Industries Inc. Beginning in 1995 with the Polaris Magnum 425 4 - stroke atv and in 1997, with the introduction of the engine of the snowmobile "twin 700" Polaris started the development and production of the power plants of the house produced, known as the line of "freedom" of engines, now found in many models across their lines of current production . This makes the production of some products Polaris 100% american made. However, in 2010 Polaris relocated its utility and assembly of sports cars to Mexico to save money. Fuji Heavy Industries now also maintains a production facility with headquarters in the U.S., in conjunction with Polaris, so that many engines are made american.

Edgar Hetteen, who was described by the Hall-of-Fame snowmobile in St. Germain, Wisconsin , as the father of the snowmobile, and Allan Hetteen, were partners in Hetteen hoist and Derrick Shop in Roseau , Minnesota . Edgar had dropped out of school after the eighth grade in 1934. Their employees, David Johnson, partnered with Paul Knochenmus, and Orlen Johnson, who was the first person to ride a Polaris, decided to create a vehicle that could travel through the snow. Primary use for These vehicles was to make places of hunting more accessible. The employees worked overtime to finish their model of the concept in 1954. After you create using a conveyor, grain silo as a track and an old Chevy bumper for skis, they had the first snowmachine. After returning from a trip, Edgar saw the machine, but was skeptical of its value and I was disappointed that the group had spent time and company materials in the machine. The no. 1 sled was soon sold to Roseau lumberyard owner "Silver Pete" HF Peterson for $ 465 in order to comply with the company's payroll.

However, the employees continued to focus on building snowmobiles and soon created a second model, called the Polaris Sno traveler. The first production model left the assembly line in Minnesota in 1956. The original models weighed close to 1,000 pounds (450 kg) and moved at a speed of around 20 mph (32 km / h). Came in a paint job of two tone (white below blue with a strip or chrome trim dividing them). With the purpose of giving to meet the new snowmobile and to demonstrate its reliability and utility, in 1960 Edgar led three snow bikes in a walk of 1,200 miles through the wilderness of Alaska, from Bethel, Alaska . The trip lasted three weeks, and most of the time, Edgar struggled to maintain 10 mph on the snow. The Fairbanks Daily News-Miner put them on its cover. However, his absence caused problems for him with the board of directors of the company. Shortly after finishing the trip, Edgar left the company in June and started a competing company called Polar Manufacturing in Thief River Falls, Minnesota . The name of the company was changed later to Arctic Enterprises, the mid-1980s, declared bankruptcy in the midst of a fierce competition, the snowmobiles became popular and other manufacturers jumped into the market. The company came out of bankruptcy and continues on today as Arctic Cat .

Polaris began developing a size consumer, snowmobile engine in the front most small to compete with the SkiDoo in the early 1960s. In 1964, launched the Polaris Comet. However, the Comet soon ran into trouble, as they could not travel in all types of snow conditions. Polaris then recalled the sleds and quickly developed a new prototype to avoid bankruptcy. The new model, the Mustang 1965, became a success as a snowmobile and family boosted the sales of Polaris. Polaris continued to develop snowmobiles similar to this model through the 1960s and 1970s, and became one of the leaders in the industry of snowmobiling.

At the beginning of the 1980s, Polaris started creating a snowmobile style Indy with IFS and a wider stance. Continued with the sleigh style Indy in the 90's with the storm, Ultra, and Trail lines. In 1985, he presented the Polaris Trailboss, which is considered to be the first all-terrain vehicles manufactured in the united States (ATV). Today, Polaris is one of the top selling brands of all-terrain vehicles. In the late 1990s, Polaris Polaris introduced the Rocky Mountain King (RMK) - a snowmobile specific for mountain terrain. In may 2009, Polaris announced the creation of a Division of Vehicles on the road. The new division will be dedicated to the growth of motorcycle, Victory, and other products of road and marks. In 2010, introduced the snowmobile Polaris Polaris fever that had a new suspension system and better trail handling capabilities. This bike is also available with retro graphics of the models of Rush and iq. In late 2005, Polaris Industries announced that it would purchase a portion of KTM Motorcycles . Through this venture KTM has developed their own ATV Polaris has also developed ATVs sports which utilize the KTM 525 and 450 powerplants that have seen great success in the racing circuit ATV.

The may 21, 2010, Polaris announced that it was moving its Osceola, Wisconsin plant parts of Mexico . It is expected that the move to save the company $ 30 million a year, with most of that savings coming from lower wages. In October 2011, Polaris announced an investment in Brammo, Inc. , an electric vehicle company based in Ashland , Oregon, united States. Its first electric motorcycle production, the Enertia Brammo , is assembled in Ashland and sold at dealerships. Polaris continued its participation in Brammo when it participated in the opening $ 13.000.000 tranche of Series C round of funding for Brammo, in July 2012. Polaris had been showing interest in electric propulsion, producing an electric version of its ranger Side-by-Side and purchase more recently, Global Electric Motorcars (GEM) from Chrysler . In a publication said, "This latest move likely signals the addition of transmissions clean and quiet for all-terrain vehicles and motorcycles under the umbrella of the brand of global giant - snowmobiles may have to wait in the progress of battery before they are commercially viable." In 2012 , production restarted on the sleds Indy-name (stopped in 2004 with the Indy 500) with the release of the 2013 Indy 600 and Indy 600 SP.

Polaris has a wide range of lubricants and equipment, which are sold under the name PURE Polaris, to compliment their machines as all-terrain vehicles and snowmobiles . Included in this line are synthetic and conventional motor oil (both 2 - and 4-cycle), grease , fuel, sprays, additives, and maintenance and care of the kits outside.