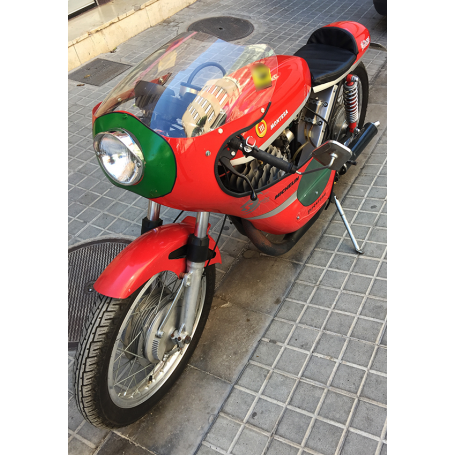 Montesa model Command 175 transformed to bike high competition with an engine of 250 cc. Year 1963 amended state. The accessories presented are replaced and is in perfect working condition.

Enrolled in Spain. HU. with the pending ITV.

Montesa is a Spanish brand of motorcycles whose origin dates back to the creation of the company of the same name in 1944 in Catalonia by Pedro Permanyer Puigjaner and Francisco Xavier Bultó (don Paco).

Data transformation: front Forks Bultaco with drum brakes previous double pair of jaws and the drum vented. Rear brake original brand Montesa. Gearbox 5-speed model Capra MX 250, 63 m. Including the crankshaft, cylinder, cylinder head,connecting rod and piston are original Capra 250 va, 73M. with a career of 64m/m, because Lamx has 60m/m of the race. In these moments it only takes a run to 300 km

Its development was extraordinary in the decade of the 50, supported in large measure by competition. His machines were essentially of 125 cc, two-stroke, being the generic name "Brio", with power always on the rise.

With the stabilization plan of 1958 came the difficulties, leading to Permanyer to make the decision to leave the competition how essential it had been for the brand. This decision led to F. Bultó (Paco Bultó) to leave the company, along with a group of stalwarts, who encouraged him to found a new brand that very soon it would be the rival to beat: Bultaco.

The model of Montesa most successful was the Montesa Impala (1962), touring bike, always two-stroke, a 175 cc, which is also produced in a version "Sport" of 250 cc. Its creator was Leopoldo Milà i Sagnier (1921 - 2006). In tests, three units of pre-series, they toured in the early sixties, Africa as a whole, from Cape Town to Barcelona, since in Europe, (more than 20,000 km in three months), showing a robustness, reliability, and athletic skills legendary.

It is currently owned by the japanese brand Honda Motor Company and is limited to producing motorcycles for the trial competition, still under the name Cota, whose first model (the Cota 247 version 68) dates back to the year 1968.