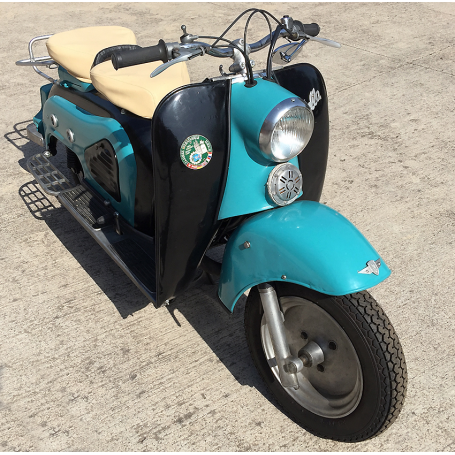 If you have documentation, if available, the name change contract, and poor international, we would have to do a high in Spain. (Custom quote with our manager).

The Zündapp Bella is a motor scooter manufactured by motorcycle manufacturer Zündapp from 1953 to 1964. It sold approximately 130,000 scooters Beautiful, with sizes of engine, ranging from 150 cc to 200 cc.

The design of the Bella was heavily influenced by that of the Parilla Levriere, also known as the Parilla Greyhound. In addition to being similar in general appearance, both designs have air tunnels prominent along the centre line of the scooter to allow fresh air to cool the engine without the fan.

As introduced in 1953, the Beautiful had a single cylinder engine of two-stroke 146 cc wheels of 12 inches, 6 V electric, a starter boot and a telescopic fork without damping. The fuel tank was mounted under the seat.

An engine of 197 cc (12.0 cu ft), which produced 10 hp (7.5 kW) was available in may of 1954. The front suspension was changed later of a telescopic fork to a fork link main type Earles with a single suspension unit on the left side of the fork. Later, the scooters Bella also had a electric 12 V fed by two batteries of 6 V. The starters electrical were also available in the Beautiful.

The Beautiful was imported to the Uk by Ambassador Motorcycles,and to the united States by International Motorcycle Company.