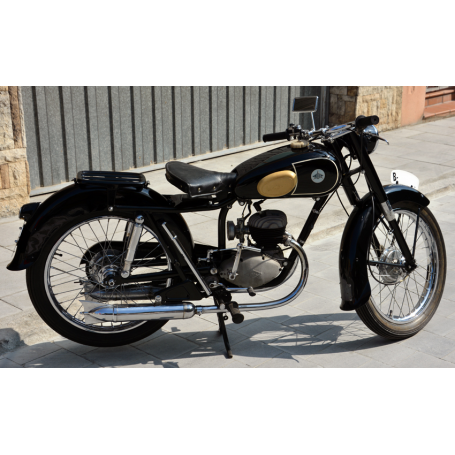 With all the guarantees.

The brand Motorcycle Lube is a construction company of motorcycles in Spain created in the mid-TWENTIETH century, was one of the first companies of motorcycles along with Montesa. Both companies built thousands of bikes over the decades of the 50's and 60's.

In 1947 the engineer Luis Bejarano Murga founded the company Lube-Nsu in Luchana (Baracaldo). Luis had been an engineer in the signature motorcycle manufacturer Douglas (Bristol) for nearly thirty years, this job provided her with the experience to be able to approach the adventure. The company agreed with Douglas in the supply of steel, the agreement did not fructify due to the fact that the English company enters bankruptcy. In 1946 designed a bike that called LBM (following the initials of its founder: Luis Bejarano Morga), later he was doing better and started the series "A-99". In its moment of production, the company built close to 1,000 motorcycles a year, such was his popularity that it was considered to be the "bike of the people".

After the Second World War, already in the year 1952, Luis Bejarano comes to an agreement with the German company NSU Motorenwerke AG (today Audi) and this Lube begins to incorporate pieces of German technology in their motorcycles.

In February of 1960, once you finished your commitment to NSU, presented a motorcycle with two-stroke engines in displacements ranging from 125 cc and 150 cc, and the change of 4 speeds; it's the Lube Renn, with rear wheel carenada. Was equipped with a fork inspired by the NSU of the time, although removing part of the internal hydraulic, which compromised their functioning shock absorber

The Renn models TR and later Le Mans and Condor 175 yes they had a hydraulic on the outside which helped in this task. The Lube Renn were used by the Road Police, which gave publicity to their machines.

In the seventies, the crisis of the sector ends with the company, specifically in the year 1967.